May (with her Half-Self-Portrait), Whitehaven, Memphis, 2017

LAUNCH F18 is delighted to present a two-person exhibition of works by artists Meena Hasan and Tommy Kha titled Other Echoes Inhabit The Garden. The exhibition opens Saturday, May 18th and is on view through June 22, 2019. Please join us for the opening reception on Saturday, May 18th from 6-9pm.
Other Echoes Inhabit The Garden takes its title from T.S. Elliot’s first poem in his Four Quartets: Burnt Norton (1936) by way of Edward Said’s speech at Toronto’s York University in 1993. Said concludes,
Imperialism consolidated the mixture of cultures and identities on a world scale. But its worst and most paradoxical gift was to allow people to believe that they were only, mainly, exclusively white or black or Western or Oriental. Just as human beings make their own history, they also make their cultures and ethnic identities. No one can deny the persisting continuities of long traditions, sustained habitations, national languages and cultural geographies…Survival, in fact, is about the connections between things. In Eliot's phrase, reality cannot be deprived of the "'other echoes that inhabit the garden.'
Both Hasan and Kha probe the power structures present in their images, questioning given hierarchies and suppositions. They ask: who is the subject, why and how is the viewer implicated, and how can the compositional lens become a tool? They cultivate the process of translating a person to image by approaching their subjects with self-awareness of their roles as artists, consistently implicating themselves in their images. Through this inquiry, the artists share a desire to articulate an Asian American experience by means of subtle manipulation of the everyday. Their works reveal complex and malleable ideas of self that lead to subject recognition, misrecognition and environments rich with textures and colors that mirror and distort the figures inhabiting them.
The artists, like all children of immigrants, have inherited the post-colonial legacies of their families. This exhibition seeks to pay respect to this inheritance and the matriarchs who shaped and raised them. The strategies present in the show acknowledge the inescapable matriarcal figures whose influences pervade the works. For Kha, who primarily works in performance and self-portraiture, portraits of his aunt and mother take precedence, the latter’s being “half self-portraits.” A stack of Southern landscapes appear on the otherwise illegible article, recalling the events leading up to his aunt’s murder. As the stack depletes, so does the article’s legibility. For Hasan, she investigates two aspects of the decorative: floral textiles and yellow-gold jewelry. The textiles present are tied to legacies of colonial influence and British intervention into South Asian patterning: the Chintz in John Everett Millais’ Vanessa, 1868, the Bengali Kantha hand-stitched quilt in Putting on Bangles and the Liberty London floral print of her mother’s shirt in Nape (Ambereen at home). The yellow-gold jewelry featured in the paintings are coveted heirlooms that are gifted generationally and reveal the desire for tactile connections to past matriarchs through the preciousness of objecthood.
Language discloses numerous distinctions present in this exhibition: Hasan, a South-Asian-American is a painter while Kha, an East-Asian-American is a photographer. Kha’s family settled in Memphis, TN after fleeing China and Vietnam. Hasan’s settled in NYC in the 70s during Bangladesh’s tumultuous efforts for Independence from Pakistan. Together, the artists attended Yale’s MFA programs in 2013 and they borrow strategies and themes from each other’s mediums, creating echoes between painting and photography and finding spaces between the two. This exhibition recognizes all these distinctions and offers the rare opportunity to witness geographically distinct colonial legacies produced in a variety of media side by side. The particularities that distinguish the artists from each other are also exactly that which communicates. Kha and Hasan work within and through ideas of distinction, searching for meaning through specificity and, in Said’s words, they survive by nuancing the “connections between things”.
Meena Hasan received her B.A. in Studio Art from Oberlin College in 2009 and her MFA in Painting and Printmaking from Yale School of Art in 2013 where she won the Carol Schlosberg Memorial Prize for Painting. In 2010, she was awarded the Terna Prize Affiliated Fellowship at the American Academy in Rome. Hasan has participated in numerous group exhibitions at museums and galleries including The Stedelijk Museum, Amsterdam (2013); Bruce High Quality Foundation, New York (2014); Anahita Art Gallery, Tehran (2015); 0.0 Gallery, Los Angeles (2019); Vacation, New York (2019). Hasan’s forthcoming solo exhibition will open at 17 Essex Gallery, New York later this year. She lives and works in Brooklyn, NY.
Tommy Kha received his BFA in Photograph from Memphis Collage of Art in 2011 and his MFA in Photography from Yale School of Art in 2013. Kha has recently held solo exhibitions at Blue Sky Gallery, Portland, Oregon (2018) and Baxter Street at Camera Club of New York, New York (2019). Kha has participated in group exhibitions in the United States and abroad including Kunstverein Wolfsburg, Wolfburg (2014); Deli Gallery, Queens (2016); White Box, New York (2017); Ogden Museum of Southern Art, New Orleans (2018) and the Halsey Institute of Contemporary Art, Charleston (2018). Kha lives and works in Brooklyn, NY.
MEDIA
YouTube
Vimeo
Download PDF 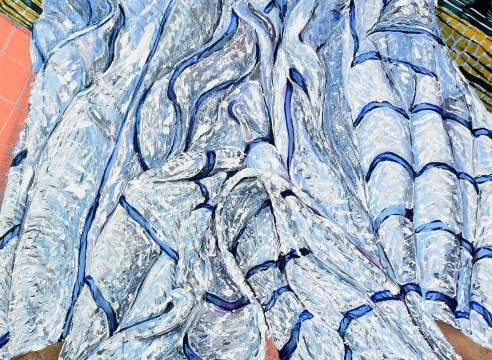 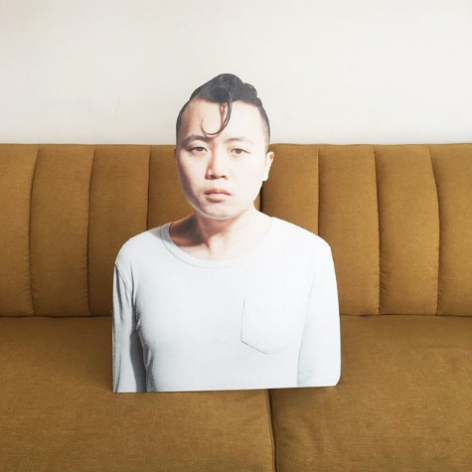 Greenpointers Thursday Spotlight: Tommy Kha and The “Negotiation Between Worlds”June 2019

To complement last Thursday Spotlight’s article on Meena Hasan, today, we speak wtih fellow artist Tommy Kha who, alongside Meena, is deconstructing identity through their joint show at LAUNCH F18 Gallery in Tribeca. 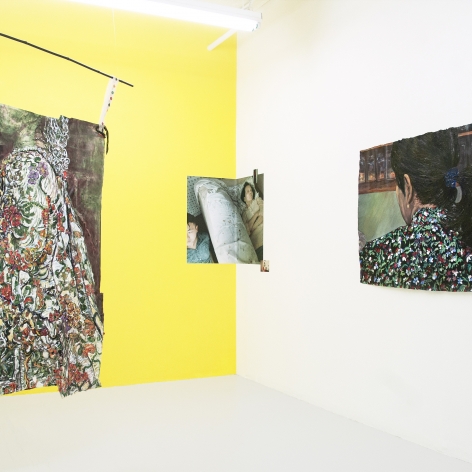 The echo — a sound wave returning to its source, doubling back through space and time — can be an apt metaphor for diasporic experiences and familial legacy. This metaphor is apparent throughout Other Echoes Inhabit the Garden, a small two-person exhibition of paintings, photographs, and sculptures made of paper by artists Tommy Kha and Meena Hasan. 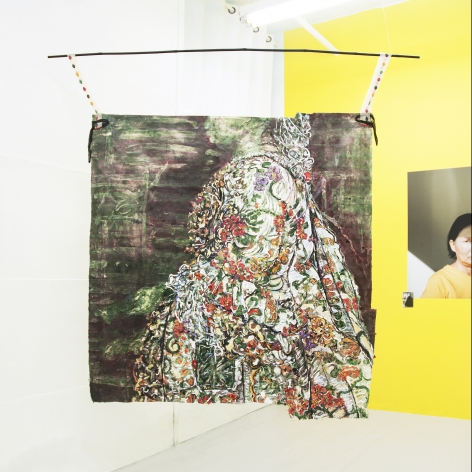 Meena Hasan’s newest show at LAUNCH F18 is, what she brilliantly and comically calls, a “kaleidoscopic onion.” To understand that, one must first understand her vivid works that stem from diverse compositions and series but are now in giddy and ponderous conversation with each other in one show. 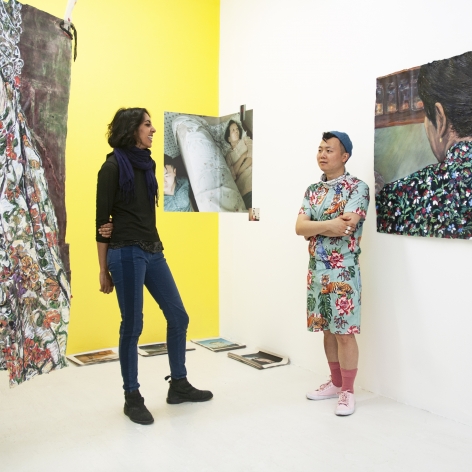 Meena Hasan and Tommy Kha sat down with Christin Graham and Sam Trioli to discuss their two-person exhibition, “Other Echoes Inhabit The Garden” at LAUNCH F18 in Tribeca. 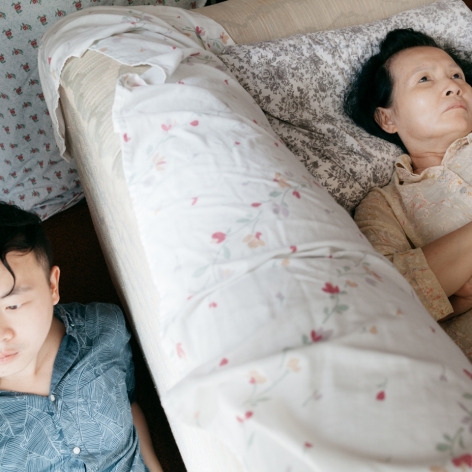 Two New York-based artists, Meena Hasan and Tommy Kha, will be featured in a show at Launch F18 Gallery at 373 Broadway (at White). The show delves into the artists’ American and cultural identities and focuses on women in their families and post-colonial legacies.