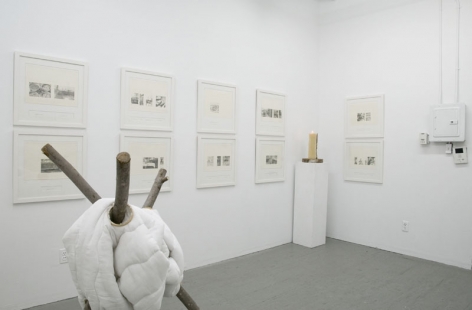 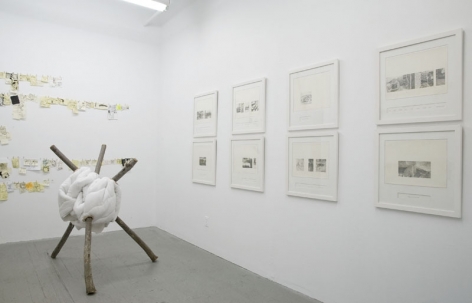 Russell Maycumber’s work shifts between drawing and sculptural objects that hover between the architectural and figural. His drawings, in particular, are ink and brush on paper made primarily on Post-it notes and torn sheets. The comic-like imagery relates to R. Crumb and Raymond Pettibon but through the use of ready-made and torn paper, images are broken up and fragmented to make unusual hybrid figures, stories, and scenes. Maycumber lives and works in St. Augustine, Florida where he completed his BFA in 2006. Maycumber was included in “Everything Must Go” at Casey Kaplan, New York last summer. He has shown extensively in the Jacksonville and St. Augustine area including Nullspace Gallery, Anchor Gallery, Florida School of the Arts, and the Crisp-Ellert Art Museum.

Miami-based artist Christina Pettersson creates drawings, video, and sculptural installations. “My Dear Leona” is a series of meticulously rendered graphite drawings from 2004-2008 that juxtapose hand drawn text in Typewriter font with small detailed images. The work derives from found writings of Pettersson’s Great-great Aunt Leona. Each drawing reads like a clue, forming a dual sense of intimacy between the artist and her deceased aunt, and the artist and the viewer. Pettersson is currently an artist-in-residence at the Deering Estate at Cutler, Miami and had a recent solo exhibition at the Art and Culture Center of Hollywood, Florida. Group exhibitions include “New Work Miami 2010,” Miami Art Museum, “Florida Contemporary,” Naples Museum of Art, and “How to Read A Book,” Locust Projects.

Brian Wondergem is a sculptor and installation artist based in Brooklyn, New York. Wondergem plays with our sense of familiarity by combining everyday objects and materials in unusual ways. His surrealistic sculptures stage the gallery setting into a kind of fractured environment. Wondergem completed his MFA in sculpture at the Yale School of Art. He has shown internationally and in New York including a recent solo exhibition at Kidd Yellin Gallery in Red Hook, Brooklyn. Additional exhibitions include: Socrates Sculpture Park, the Hudson Valley Center for Contemporary Art, ABC No Rio, Apartment Show, and Gallery Aferro. In 2010, Wondergem participated in Art in General’s Eastern European Residency Exchange Program, where he worked with the Croatian Council of Artists to create a series of public works in Zagreb, Croati a.