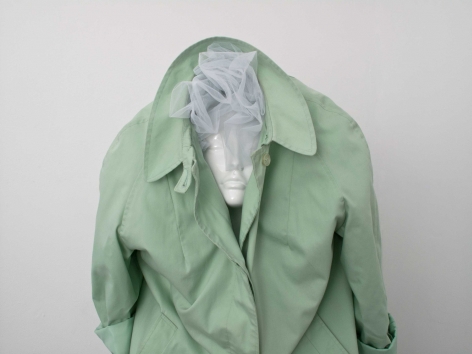 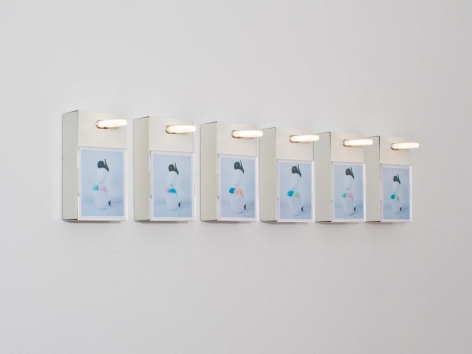 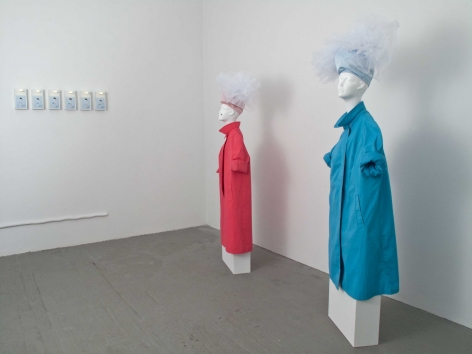 site95 is excited to present a solo exhibition by Marie Vic at Launch F18, entitled “Fly.” In contemplating the theme for this exhibition, Marie Vic initiates a rare glimpse into the life of a fly. The exhibition is a simultaneous blend of cold detachment with wit and humor as she brings together contrasting elements such as fluorescent tubing and performative mundane objects. The gallery is minimally furnished with sculptures and a series of still-life instant photographs composing a fictional female character which surrounds the main subject, the fly. Collectively these elements conjure up a sense of vanity.

Vic’s body of work draws from art historical and literary sources. Three sculptures, referencing Warhol, create a playful atmosphere utilizing female mannequins, trenchcoats, tulle, and ladies panties to complete boldly colored campy figures. Vic brings ironic whimsy to the work through the use of repetition, revealing singularity to the mass produced “dollar store object” that she manipulates. Resembling the fly as a beauty mark on her figure’s face, she investigates how such an insignificant being, a fly, can perform a form of vanity. These characters are paired with a handful of color instant photographs. The images depict variations of this same bust from the sculptures, layering a presence that is more removed.

In conjunction with the exhibition, a written work was published concerning Marie Vic’s time with “Fly,” for the site95 July Journal. Issues can be read online or purchased in printhere.

Marie Vic is a French artist who lives and works in New York City. She received her Diplôme d’Architecte from E.S.A, Paris in 2007 and completed her MFA in photography at Parsons the New School for Design in 2010. Also in 2010, “Fri(e)eze,” a series of instant photographs, was exhibited at Aperture Foundation in New York. Her sculpture “Butt&Zoni” was featured in “Styles Français,” an exhibition presented at Artcurial Auction House in Paris. Sculptures and photographs from her project “Life! Still” were shown at Hendershot Gallery in New York. In 2011, her video “30SecOf” was presented at the art fair SCOPE in New York, and at Maison Revue Noire in Paris; it is now included in the collection of the Fond Régional d’Art Contemporain de la Réunion (F.R.A.C. Réunion).