LAUNCH F18 is delighted to present Flags Down, a solo exhibition by Brooklyn based artist Tyler Lafreniere.  This will be the artist's third solo project with the gallery since 2012.  The exhibition opens on Tuesday, February 28 from 6-8 PM and will remain on view through April 23, 2017.

Flags Down continues  Lafreniere's practice of transforming a space into the tangible mannerisms of a contemplative dialogue on masculinity and its ritualistic cultural identity. In essence, his installations have the connotation of time capsules. Here Lafreniere hones in on the personal and social liturgy of ice fishing. This work considers its tradition of self imposed isolation and retreat.  As in several of Lafreniere's previous installations, he highlights the subjects masculine space, drawing our attention to its  subtle  complexities, and allowing its relationship to hermitage to be noted both artistically and in observance.

Tyler Lafreniere  is a visual artist based in Brooklyn, NY. In 2006, Lafreniere earned his BA in Fine Art from Hampshire College in Amherst, MA. During his undergraduate studies, he also concentrated in Printmaking at Goldsmiths University in London. He has shown in various venues through out New York and around the United States, and has been showing with Launch F18 since 2012.  In 2016 Lafreniere opened the gallery "Mrs." with Sara Maria Salamone in Maspeth, NY. 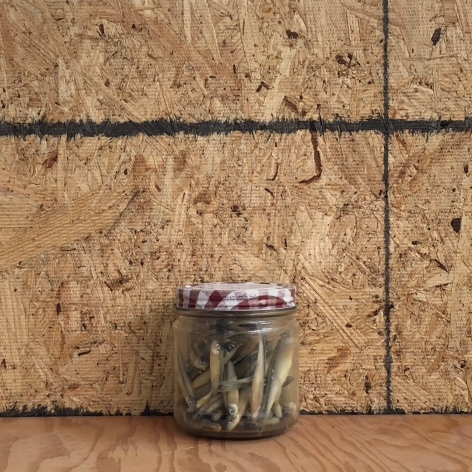 Brooklyn Magazine The Best In Brooklyn Art This WeekendFebruary 2017

Launch F18 is in Manhattan, but Tyler Lafreniere is a Greenpoint boy (except for his unending devotion to Maspeth, Queens, where he runs Mrs. Gallery with Sara Maria Salamone).