Launch F18 presents new paintings by Eric Freeman.  This will be the artist's first exhibition with the gallery, featuring works made with oil and pigment on canvas.

Freeman's paintings radiate and glow, glitter and move, with an unearthly light while simultaneously absorbing light.  This duality is common within Freeman's ephemeral work, with this ever-evolving quality of their surfaces.  The paintings react optically to color and light surrounding them, conditional on environment and angle in which they are viewed.

Contrast runs throughout this body of work.  Freeman notes, "Contrast is an underlying theme to my paintings.  Without pain there is no pleasure, without shadow, there is no light, without contrast, there is no experience."

Freeman is fascinated by the process of making.  To add new depth to this body of work, he paints with a layered method of combining oil and "high tech pigments of the modern age."  Layer upon layer of medium creates a new textured surface from which light refracts, allowing the light to reverberate between each layer.  With this process and the tactile nature of Freeman's materials, illusion and 3D holographic images seem to form.  Freeman, referencing other light based work, (i.e. Dan Flavin or Robert Irwin) uses these materials to interact with texture and light to influence the way that light itself is perceived.

In the words of painter David Salle, "These paintings create a feeling of strong light and shadow not found in nature; they have the luminosity associated with a solar event, the energy of an explosion, infrared light, light that would burn rather than illuminate.  Unhealthy light.  The phosphorescence of television."

Eric Freeman was born in New York City in 1970 and continues to live and work in Springs, East Hampton, NY.  He attended Tufts University earning his BFA.  Freeman has widely shown nationally and internationally with exhibitions at Circle Culture in Germany, the Wetterling Gallery in Stockholm, Galerie Forsblom, Helsinki, Alain Noirhomme, Brussels, and the Saatchi Gallery, London and Mary Boone, Stux Gallery and Feature, Inc. in New York.  Freeman's work was recently acquired by the Parrish Art Museum in Southampton and is included in the Saatchi Collection. 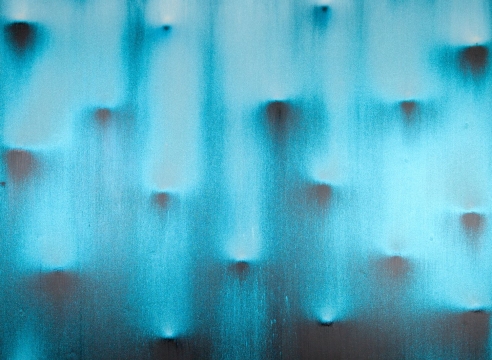